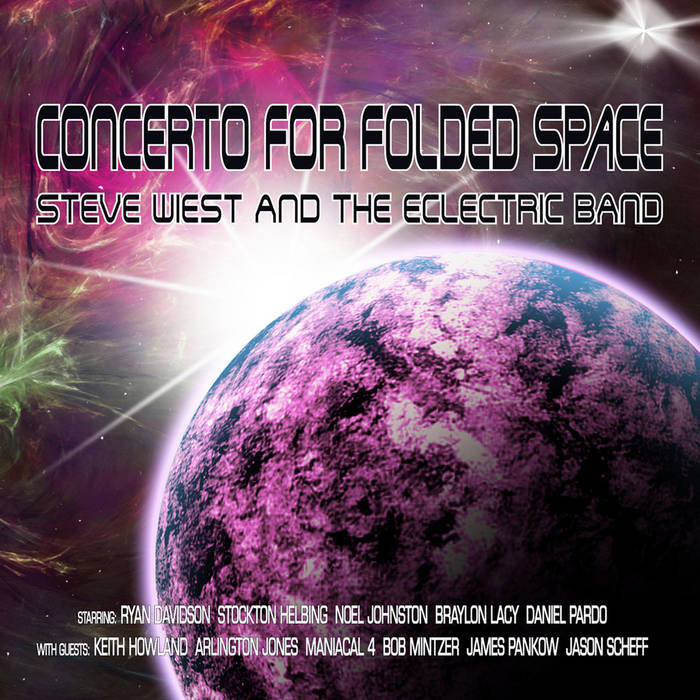 Here is the track "Zooneyan Reunion" from my ArtistShare® project CONCERTO FOR FOLDED SPACE. All of the pieces are based programmatically on my sci-fi novel THE DOVER STONE.

On "Zooneyan" we hear from one of my all-time heroes Jimmy Pankow from the super group Chicago, myself on trombone, the mighty trombone group Maniacal 4 and of course: my group, The Eclectric Band: Stockton Helbing: drums, Daniel Pardo: flutes, Noel Johnston and Ryan Davidson: guitars, and Braylon Lacy: bass.

In my book, The Dover Stone (you really should pick yourself up one: warm and toasty, right off the press from Amazon!) there are a race of alternate dimension beings known as The Urisk Zoon-ee. Thousands of different races of Urisk populate the planet Av-Y-Lon, but this piece has to do mostly with the Zoon-ee and the Zest.

The Urisk Zoon-ee are 550 pounds of hedonistic UGLY (by human standards.) With purple and green blotchy skin, huge saucer-like black weepy eyes, big droopy ears, a scimitar chin and appendages on their head that are reminiscent of hair, except that they are finger-thick and react to Zoon-ee emotion. They have HUGE mouths that are frozen in an ear-to-ear perpetual grin that sports whip-like protuberances that clean their teeth, but look like worms darting in-and-out. It is said that their appearance alone can curdle milk. However, these beasts are friendly, loyal, loving, wise far beyond human standards, and value story-telling above all else.

To an Urisk Zoon-ee, telling a good tale is almost a religion. The art of raconteurism is celebrated far-and-wide on Av-Y-Lon and officially recognized every 50 years at their Earth base deep under the ice of Antarctica at Lake Vostok. There, the famous 5 week soiree known as Dru-Yd takes place where thousands of Zoon-ee come together to party at a level not seen anywhere else in any universe. At the end of this shindig-supreme, there is a competition that crowns the next Hye Dru-Yd or Champion Raconteur.

"Zooneyan Reunion" is programmatically about such a competition and more specifically, the battle between Hyp Zoon-ee and Ryp Zoon-ee... two of the greatest raconteurs on Av-Y-Lon. During the Dru-Yd competition, there are multiple levels of tale-telling where all forms of the art: prose, rhyme, mixed meter, strange forms, and props are used (some of these activities take place with the contestants under the influence of hallucinogenic beverages for good measure.)Essentially, a GRAND time is had by one-and-all.

The programmatically-informed cinematic sounds that you hear are the opening of Dru-Yd (Ryan Davidson's EPIC guitar cadenza at the top) the voice of the Zoon-ees (described in my book as "an army of crabs scuttling across a cold stone slab in the basso profondo register")and at the end, the secret twinkly language of the ever-present Urisk Zest (what we call fairies)whose role at Dru-Yd include servers of the Urisk favorite drink: Guinn-Holl-er.

Jimmy has the first solo, actually a "Pankenstein Choir" of 8 different takes that I edited into one amazing "Saint James" offering...followed by my own Wiestenstein Choir. The writing is reminiscent of Jimmy's style of composing with Chicago as well as direct quotes from his well-known trombone-persona. It is a Pankowian love-fest throughout! :)

With a zeal for finding inspirational ingredients for his muse, Steve is multi-genre: recording artist, composer, sci-fi author, cartoonist, and educator. ... more

Bandcamp Daily  your guide to the world of Bandcamp